More time for an UPS with a Lead-acid Battery-array

If you own an UPS (Uninterruptible Power Supply) to power devices while a power failure, you sure know time is running to safely shutdown your devices. For this reason i prefer using low-power and embedded devices which don't consume that much power so are able to run longer while the outage. According to my power-meter the sum of all devices (with modems, switches and a mini-itx server) is at about 70W. My current UPS is an APC BE500GR what according to it's battery specification is just enough to run for about 20 minutes in my situation. Never compared that directly when i bought it but actually it works for less than about 10 minutes, sure the battery suffered already after one-two years usage. Recently a friend called me, talking about his company trashing 16 sealed lead-acid rechargeable batteries, if i might be interested. Even if they might not work at all, i must give it a try i thought, to use them all toghether with my UPS.

First check what voltage the original shipped battery has. 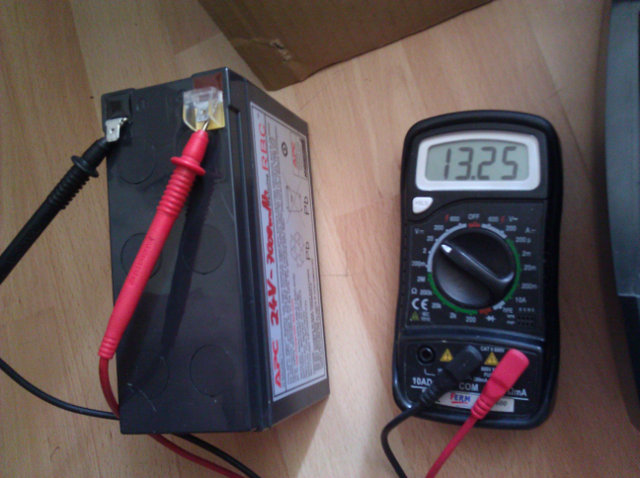 My voltmeter shows 13.25V so i went ahead to check the others. After checking all 16 batteries i noticed none of them has more than about 5V but most of them stable, just two batteries have a huge voltage drop. Then just daisychain enough together to get the needed voltage i thought, but that didn't work as expected. Maybe they need to be recharged? The UPS didn't accept any of them when i tried them one-by-one instead the original battery.

Even when applying load (like a fan), we've got more than 12V with those daisychained batteries. [picture missing] Next i would like to recharge them but i don't own a suitable charger for 12V lead-acid batteries. Just an AccuManager10 for AA/AAA NiMH 1,2V batteries, what i highly recommend but isn't taking me any further in this situation.

Then a friend told me about the Schumacher XM1-5 automatic battery charger which "maintains both 6 and 12 volt batteries keeping them at full charge using float-mode monitoring". From it's manual the intersting part:

The specifications just say "Charger Type: Fully Automatic Microprocessor Controlled" and "Output Voltage: 6V/12VDC - Output Current Cont: 1.5A". Hopefully it is able to "refresh" and recharge those batteries. We'll see it if the "CONNECTED LED" will be lit.

Another interesting things about batteries: